TOP > Blog > Culture > Discovering the dance and tradition of Onidaiko

Discovering the dance and tradition of Onidaiko

Sado Island, in the eastern part of the Sea of Japan, is located 32 kms off the coast of Niigata prefecture’s mainland.  It is easily accessible by ferry from two separate ports – Niigata-Ryotsu in northern Niigata or Naoetsu-Ogi in southern Niigata. This beautiful island has so much to offer. 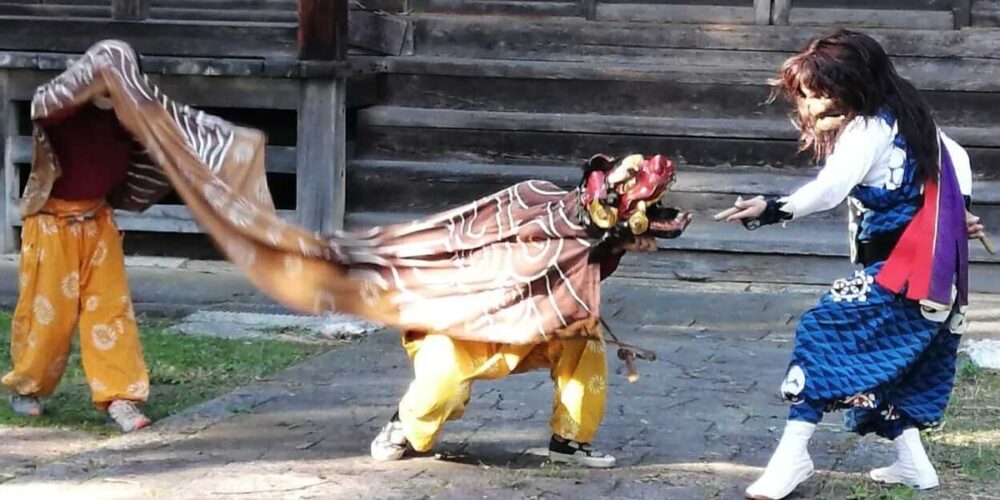 From the moment you arrive, it’s hard not to be enamored by the natural beauty of both the coastal shoreline and the lush farmlands. The people of Sado Island famously produce an abundance of fresh foods from the sea and the land.

When traveling around the island, it is so aesthetically refreshing. We do not see the overdevelopment of infrastructure that we have grown to accept from places with such beauty. With a population of around 55,000, the people of Sado Island have managed to retain the island’s absolute charm. While conversing with the local people, you will feel a sense of calm and joy. It is soothing and a great reminder of the simplicity of yesteryear. 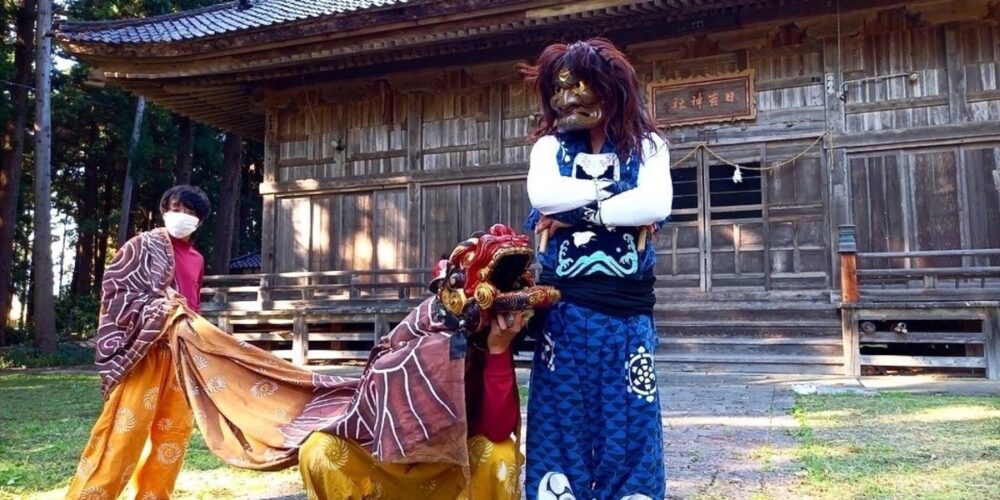 Sado Island’s people have also managed to preserve many of their traditions from long ago. One traditional cultural art of the island is called Onidaiko. The word “oni” is loosely translated to devil and the word “daiko” refers to Japan’s powerful taiko drumming.

Onidaiko is an energetic performance to pray for such things as bountiful harvests on the land, success for the fisherman on the sea, and the safety, health, and happiness of the people of Sado Island.

This traditional art is currently performed by 125 different communities on the island. Although every individual community’s performance is unique, they are typically classified into five general styles – Hanagasa, Issoku, Mamemaki, Maehama and Katagami.

The notable differences between the five styles of Onidaiko, include the number of characters, the costumes and masks worn, the rhythms played, and the type of dance performed.

The most prominent of Sado Island’s five styles is Katagami. 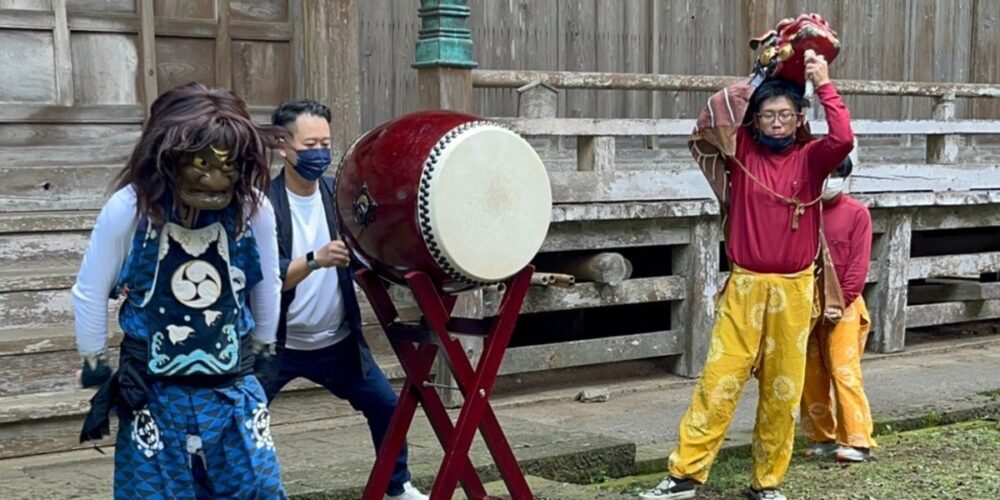 While listening to the deep, pounding rhythm of the taiko drum, you witness a battle between the oni and the long, mythical lion creature, known as the shishimai.

When seeing an altercation between two very different characters, it is human nature to consider two things. Firstly, is one character fighting for good, the other for evil and secondly, is one in the right, while the other in the wrong. It can appear a little confusing.

When we take a closer look at the oni, we notice a mask which appears intimidating with its piercing eyes, broad nose and clenched mouth.

The oni’s mask is hand carved from Paulownia wood, known in Japan as kiri, which is very light, fine grained and warp resistant. Paulownia wood is the fastest growing hardwood and is used for producing such things as chests, cabinets and clogs. This wood has a very high fire ignition level of around 420 degrees Celsius compared to other hardwoods, being 220 degrees Celsius. It is often used to make charcoal for sketching as well as powder for fireworks.

The oni’s long, luscious hair is made from horse hair or rice straw. When moving his body, the oni shakes his head quickly from side to side, creating great drama from the exaggerated movement.

On his feet, the oni wears zori, which are handmade of straw from the rice harvest. As the oni’s dance is very intense, he can go through five pairs of zori in one day during a festival. 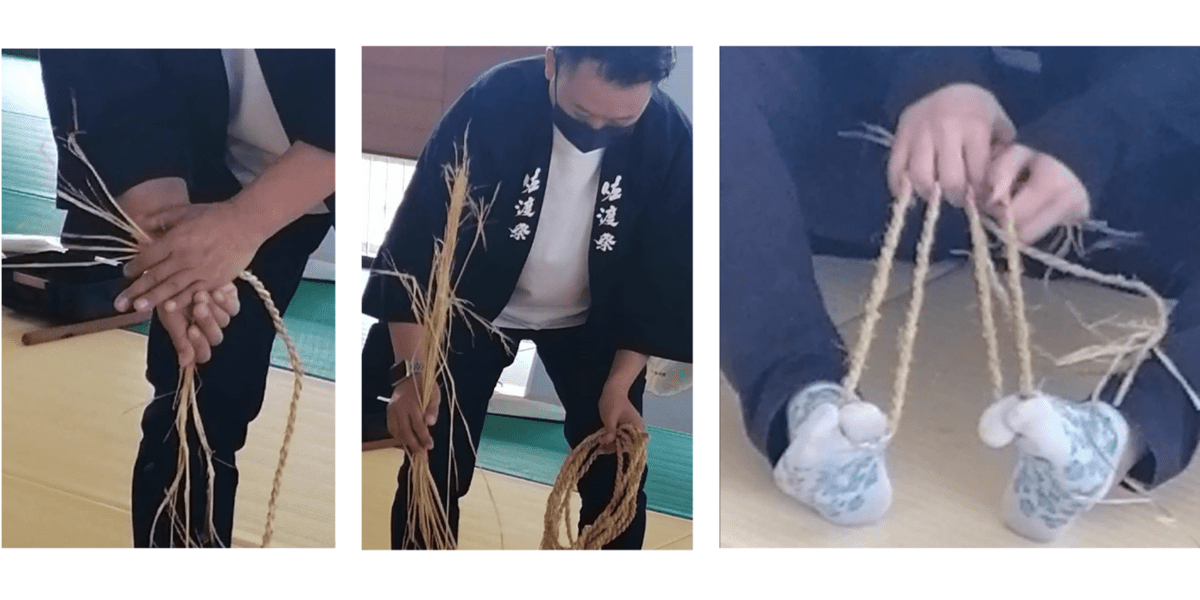 In the Katagami style, the oni’s dance is smooth, fluid and clean, with controlled movement. This differs from other styles of onidaiko, which are more bouncy, jarring and erratic. The Katagami style of movement derives from Noh Theater, another of Sado Island’s wonderful traditional cultural arts.

With that image in mind, it is hard to imagine that this devil faced oni is actually revered as a God, who is striving to cleanse for purity.

Now, let’s look at the shishimai. This character is performed by two people simultaneously, one being the head and the other the tail. 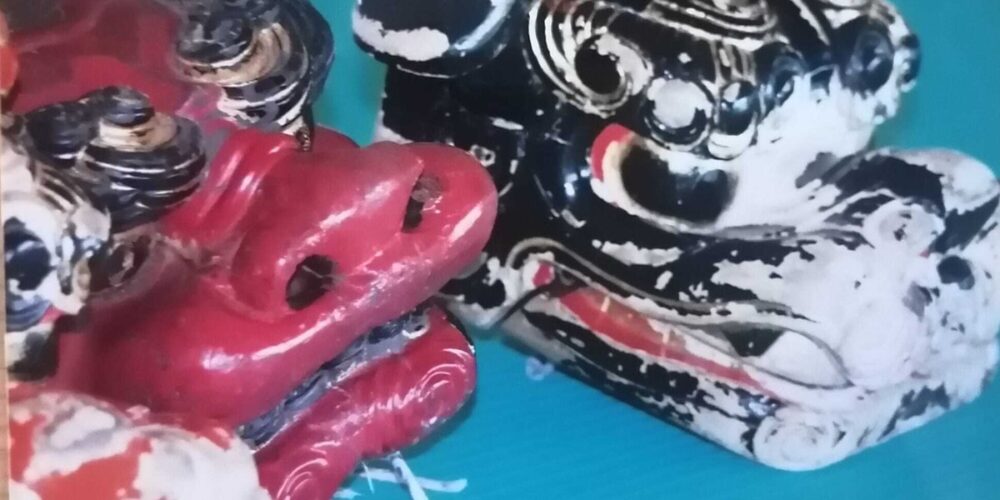 The head of the shishimai is a dramatic, vibrant wooden face with a tuft of hair, also from a horse. This extremely heavy head can vary in color, from black to red with gold features. It has a large hinged mouth that opens and shuts, creating a loud, frightening clap. The power required to lift the head is enormous, but to then add the dancing and create the snapping effect is astonishing.  It is said that if you allow the shishimai to bite your head, you will become smarter. 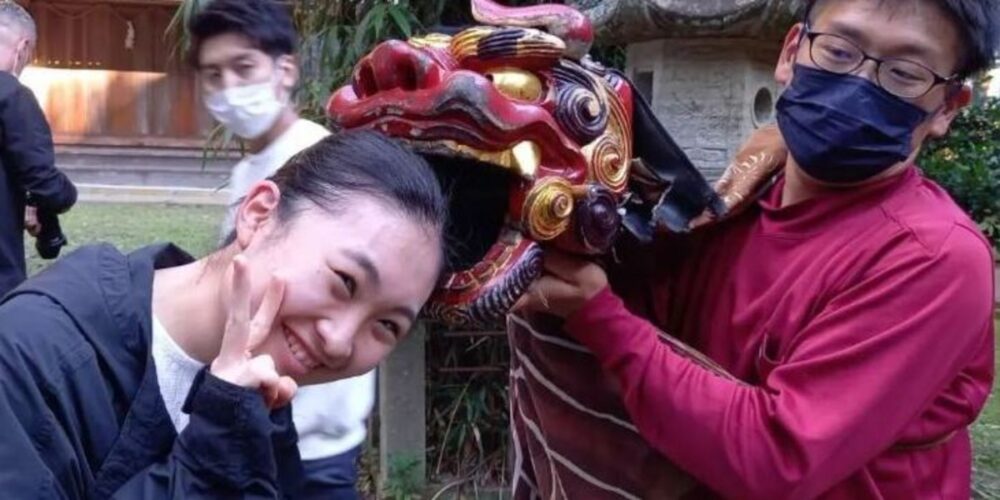 So, why are these two impressive characters battling and what are they trying to achieve?

The oni’s duty is to capture any evil spirit which may be lurking, including within people. He dances with a bachi (taiko stick) to try to draw out the evil spirit and lock it away in the shrine, ensuring it can do no harm. In this instance, the taiko represents the shrine and its pounding draws the evil spirit.

The shishimai’s duty is to protect the shrine at all costs from evil spirits. It is acting as the shrine’s benefactor.

This never-ending, graceful battle between the oni and the shishimai sees them both competing for the better good.  To watch these two characters interact to the sound of the taiko rhythm is riveting. Their determination to fulfill their duties is unwavering.

This can also be said for the people of Sado Island.  Finding that perfect balance between an island’s beauty and the demands of business is a battle.  However, this is a battle that they seem to be getting right.  The harmony that has been created on Sado Island between the traditions of old and the growing tourism is inspiring. Let’s hope this dance continues for many years to come.

I’m a happy, smiley, fun loving, adventurous, Australian mother to 3 daughters. I was involved in the snow industry from 1990 working in Australia and the US in a multitude of jobs incl marketing, media, accom, snowboard store owner. After living in Nagano for 11 years, I settled in Niigata 3 years ago.

A Mine to Remember