Do you know Noh?

The story behind this unique form of theater and how a tiny island far from Tokyo became Japan’s preeminent center for Noh. 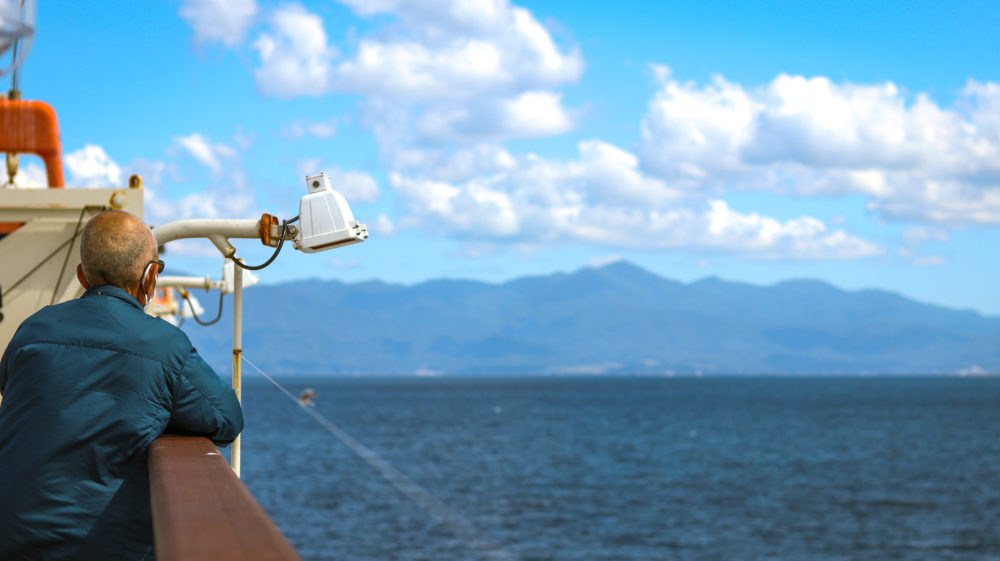 Niigata Prefecture is home to Japan’s fifth largest island, Sado. With an area of 857 square km (331 sq miles), Sado boasts an impressive array of natural beauty including terraced rice fields, rocky coves, and the largest lake in Niigata Prefecture, Lake Kamo. The island is not only known for its natural beauty, as it also has a rich history and culture. Including a unique form of theater still often passed over by many tourists. Photo by JJ Van Niekerk​​

“I think my nose is too big” I laughed as the Noh actress gracefully accepted the mask I handed back to her. Made entirely of Japanese cypress, masks such as the one that crushed my American sized nose, have been worn by Noh actors since the 14th century. Instead of relying on facial expressions to convey emotion, actors simply angle their faces to catch different light. “It really does look like you’re sad when you look down” said our interpreter showing me some pictures of myself to look at. 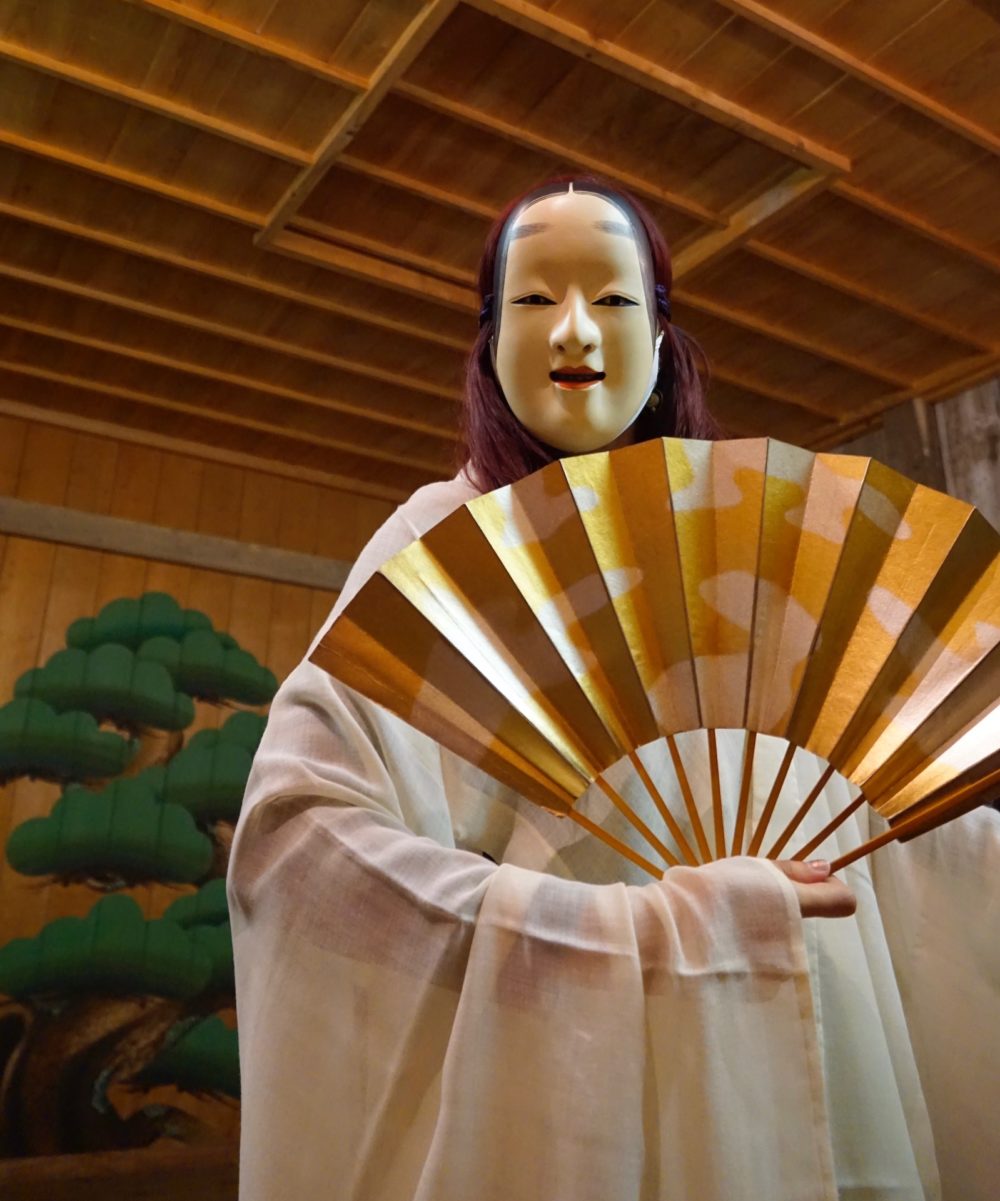 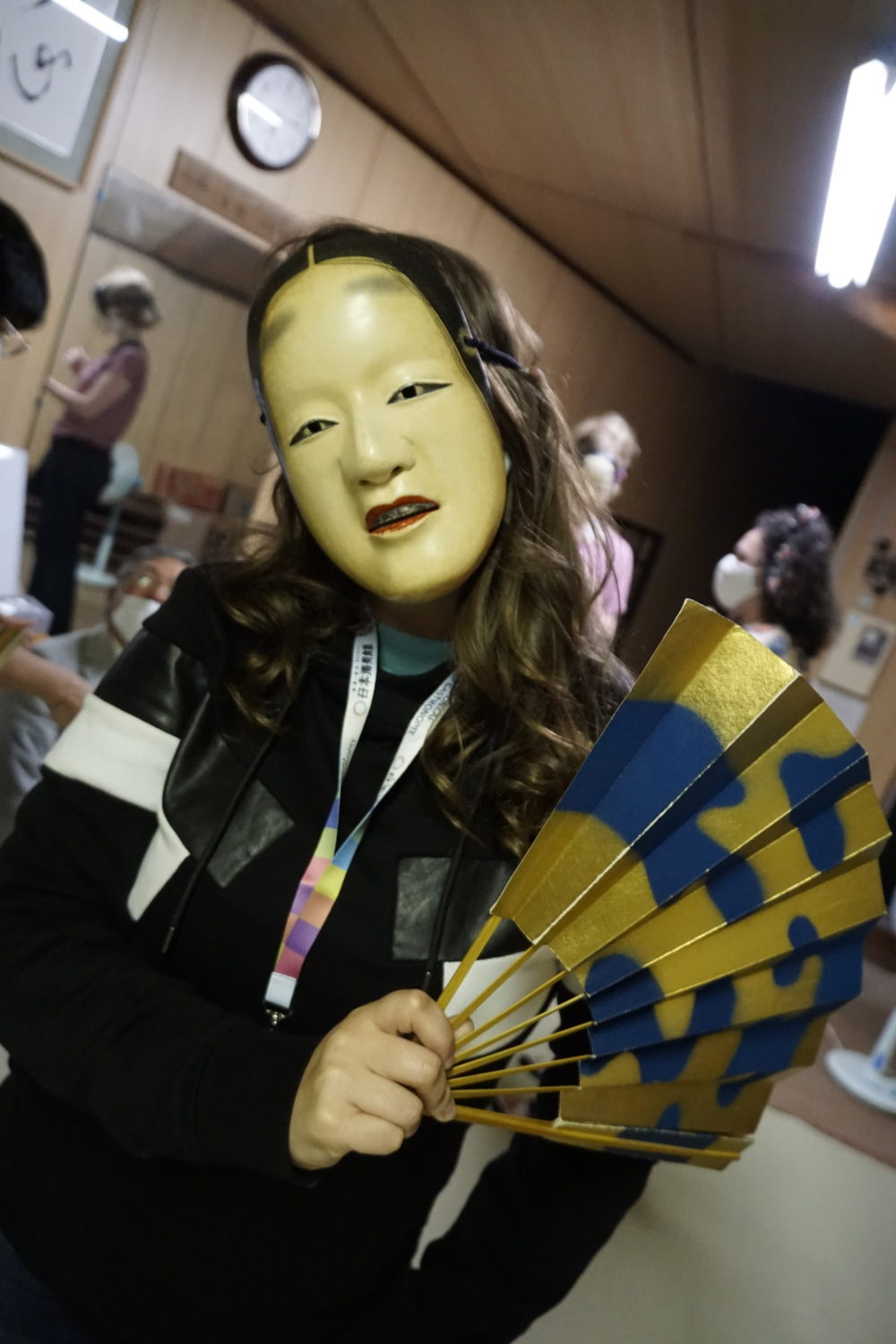 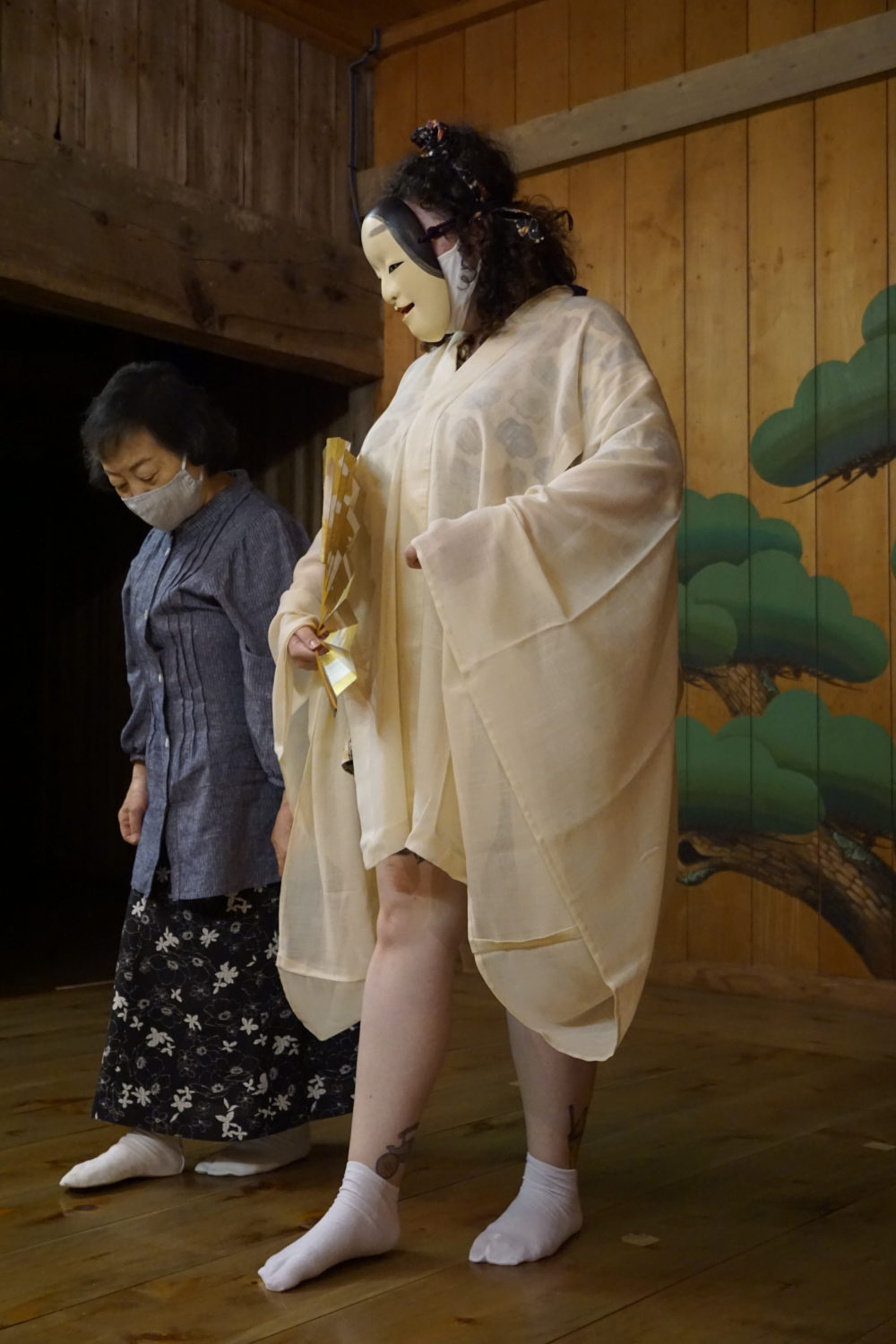 Sado Island was once a place of banishment. But somehow it became home to Japan’s largest concentration on Noh stages. And the thatched roof stage at Kusakari Shrine on Sado Island served as our beautiful backdrop for the evenings Noh lecture hosted by the Niigata Board of Tourism.

Starting possibly as early as the 6th century, the government would send people to Sado who questioned their authority, or didn’t succumb to their wishes. Japan’s leading Noh actor, Zeami Motokiyo, found himself banished there for “embezzlement” in 1434 after he lost favor with the shogunate. He remained on the island presumably until his death some years later. “People hear terms like ‘banishment’ and ‘exile’ and assume Sado was a place for criminals, but in reality it was more a land of intellectuals” claimed our tour guide Tsukakoshi Takayuki. 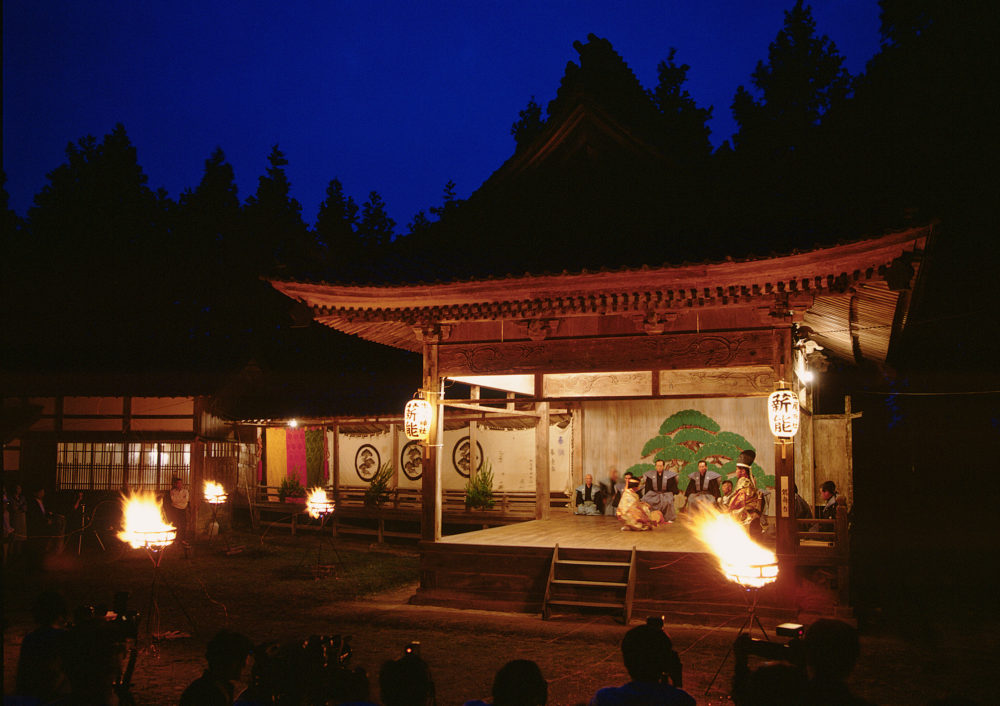 It was the first magistrate of Sado Island, Okubo Nagayasu, a Noh actor himself, that was the main force responsible for the proliferation of Noh throughout the island. During the time of Okubo’s governance, many Noh stages were built and troops formed. “At its height, some 200 stages existed on the island”, Takayuki explained as we drove past yet another stage the following day.

Sado, lacking in upper-class citizens, allowed farmers and peasants to watch Noh performances for free. Its popularity spread quickly throughout the island. Today, out of Japan’s approximately 100 remaining Noh stages, 32 are in Sado. 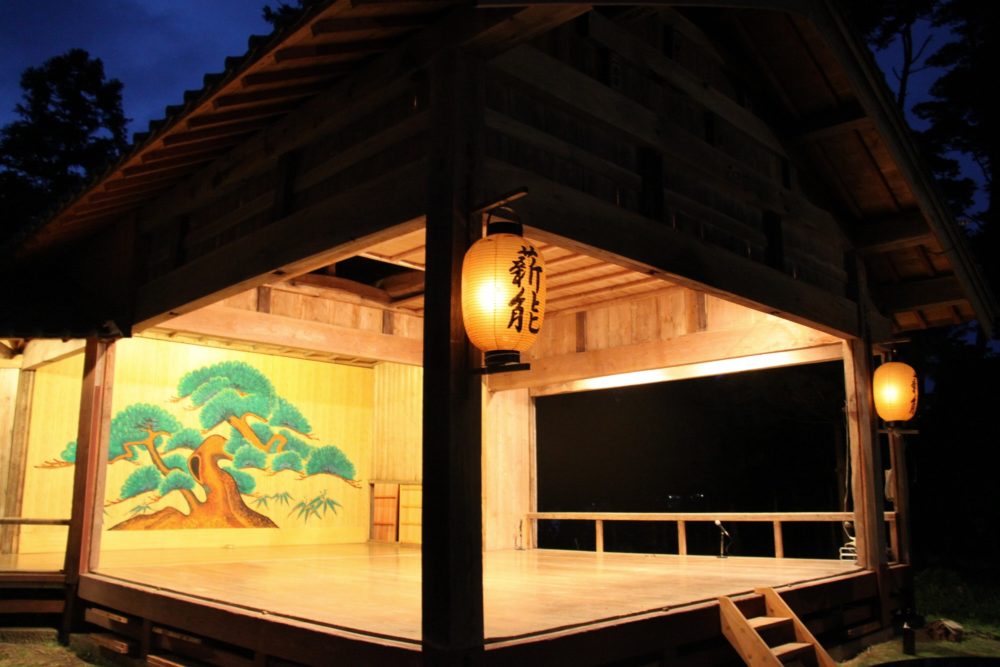 Close up of the empty stage.

However, Noh on Sado island was slightly different from the version enjoyed on the mainland. Stages on Sado were built facing out into the open air. Meaning that the audience watched while sitting under the open sky. This allowed for couples and families to bring boxed meals to eat and drink while enjoying the performances. The shows also lasted all day. There would be three performances, each with their own story geared towards different audiences. The early morning performance would often be a well-known fairy tale or folk story for young families. The mid-day performance would involve a love story for couples, while the final performance, under the night sky, would often be a scary story featuring ghosts or demons.

Much like in Shakespeare times, traditionally Noh actors were all male. But over time, Sado allowed for female actors. We had the opportunity to talk to three of these ladies and try our own hands at Noh acting. The ladies emphasized how acting through a mask was all about the small, graceful movements. They taught us some standard poses and the proper way to walk across the stage. Tip – don’t lift your heels and move very slowly. I received a firm “No, no” after tripping over my own feet trying to turn around. I tried blaming the stumble on my very limited visibility, but the actress simply replied “You must root yourself firmly; become one with the stage”. 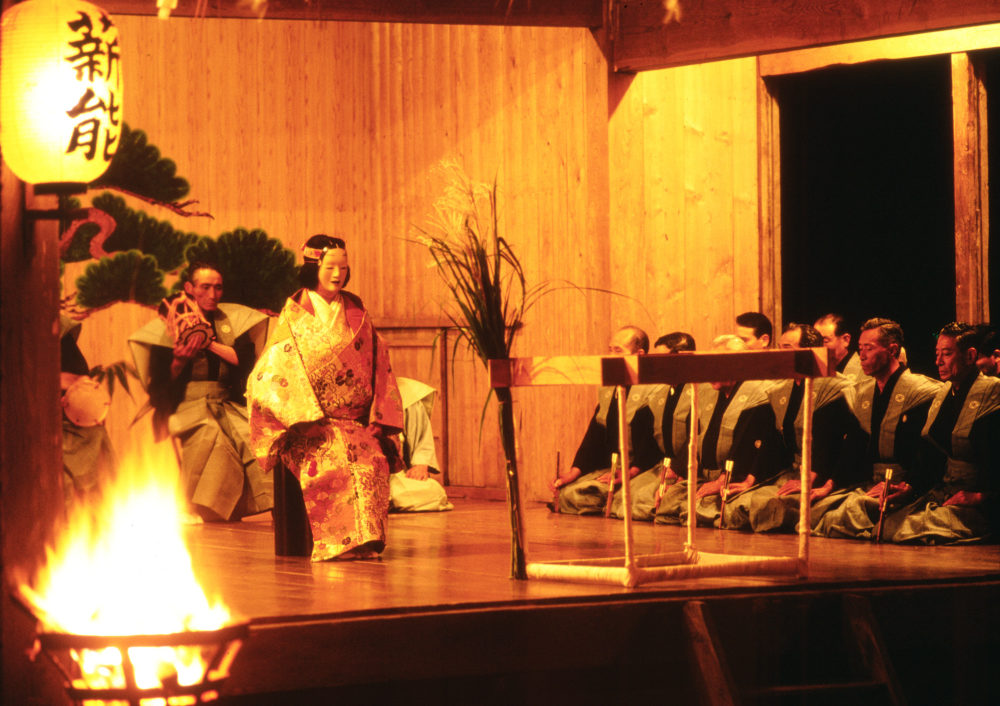 “In such a fast-paced world, sometimes it’s good to slow down” expressed another of the actresses. While I agree with that statement, I would like to offer up an additional theory as to why Noh actors walk so slow – they can hardly see in those masks!

Sado island still offers Noh performances for free (or a very nominal fee) from April to November. Contact Edge of Niigata for help arranging to see this strange and beautiful form of theater for yourself.

Farming experience: They are all connected! 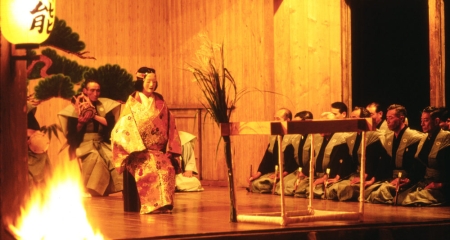